Two things stand out for me from my experience at Powerman Belgium (PM) 2014. Belgium was very flat and very hot. Thank God there’s been a heat wave in Ireland for the last few weeks which has somewhat prepared me!!


The last few weeks have involved focussing and zeroing in on PM Belgium in order to see what standard I’m at as I approach the Euros in two weeks’ time.


Driving from Brussels Airport was a very scary experience as it was the first time I drove on the right hand side of the road with a left wheel drive car. After nearly three hours of sweaty palmed driving I made it to my hotel which should have taken just under one hour. Yikes, at least it was only Friday.


Once I got settled, I put the bike together, grabbed a bite to eat and caught some sleep.


On Saturday morning I went over to the race registration to check out the race start and to run and cycle around the course once.


The 10km run was four laps of 2.5km each that went around a large sports arena outside the town of Geel. As I ran around the 2.5km lap, I tried to imagine what it would be like on Sunday when we were racing around it four times with everyone shouting and roaring at us.


The 60km bike was three laps of 20km each that left the sports stadium and went out onto totally closed roads but had to go back in and pass through transition for every lap. This involved very technical twists and turns on the Time Trial bike which for those of you who ride TT bikes will know is very tricky to do at high speed.


After I had recced the course I went back to the hotel but made sure to stop along the way in a Spar shop of all places to get a few bars of proper Belgian chocolate. Do those Belgians know how to make nice chocolate or what!


I’ve been trying to avoid gluten for the last few months but when you’re racing abroad it’s very difficult to stick with gluten free diet so dinner was a fairly simple affair of spaghetti bolognaise.


It was very difficult to sleep Saturday night with the nerves and adrenalin pumping through me. I was thinking about breakfast in the morning, how I was going to start the race, where I was going to try attacking on the run, what I was going to do on the bike, etc.


On Sunday morning I had a nice lie-in till 8:30 as the race wasn’t starting until 14:20 and I wanted to delay breakfast for as long as possible I always try to stop eating and drinking around four hours before the start of a race.


I could feel the heat as soon as I opened the curtains in my room. I knew it was going to be a hot one


Back to my room then for another little rest and to double check for about the twentieth time that my bike was okay.


I arrived at the course after having to take a big detour due to the roads being already closed for the race. Thankfully, one of the Belgian marshals who I met at a crossroads drove in front of me all the way to the sports stadium.


Once I got out of the car, the dead heat of the sun that hit me was almost over powering. There literally wasn’t a cloud in the sky or as I was taught in school “Nί raibh scamall sa spéir”. Was I glad that I brought the sun cream with me!!


There was a soccer pitch next to the car park where I went through my warm up routine as I tried to ignore some of the pains and niggles I’ve been carrying for a few weeks. I tried to focus my mind and shake off the nerves and usual fear that was coursing through me as I tried to picture how I would start the race.


Once the announcer called for all the male athletes to assemble at the start area I had my work cut out trying to muscle my way to get to the start line.


What a fast start!! While there were no hills on the course there must have been at least ten right angled corners that you had to slow down into and then try to speed up as guys put in fast attacks.


After around 5km, there were four of us who had pulled away from the main group. Two French guys, La Duey and Cadalen and a Spaniard, Rocca, plus myself.


Rocca put in a couple of continuous attacks in the second half of the 10km but we were able to keep him covered at all times. My plan was to stay with the lead group for the first 10km and try to break away if I could. As the pace was so fast I was happy enough to follow the other three and see what would happen on the bike.


Even though I came into T1 around 6 seconds off the lead, I was the first out on the bike.


I must have cycled 5km down the road before I started to try putting me feet into my cycling shoes.


Next thing I know, I see La Duey and Cadalen tear past me as I put my feet into my shoes.


What could I do though but keep the legal 10 metres back from the two of them and wait for my opportunity to pass them both.


The bike course was also very technical with lots of twists and turns. I attacked four times throughout the full 60km but found it difficult to drop the two French.


I had two bottles of liquid on the bike and these were totally empty after 45km so I was looking forward to the water stations on the final 10km run. I was dreaming about water as I pedalled through the final and fourth lap.


I should have probably guessed after the second attack that I couldn’t drop them and have saved some of my energy but I’m the eternal optimist and kept trying to break away.


As I came over the dismount line into T2, the two guys in front were just racking their bikes so I knew that I’d have to be quick if I was to have any chance of catching them.


The first water station I went through after about 1.5km was so welcome I nearly stopped to drink. The water hoses they had set up to water athletes down were also brilliant.


However, I was going from a famine to a feast in terms of drinking water and took on water four times as I worked my way through the 10km. Of course this resulted in a stich meaning that I went down to a 7 minute mile as I struggled through the third lap. At around 8.5km, I heard someone coming alongside me and attempt to pass me. I had about two seconds to decide whether I was going to let this guy pass me and take second place or was I going to dig deep and empty the tank for the last kilometre.


I said to myself “No way” and starting running for my life for the last kilometre. Coming into the last 200 metres was amazing as I focussed on the finish line with people all round shouting and roaring. I managed to hold on and outsprint the Belgian who had been putting me under pressure for the last 1.5km. 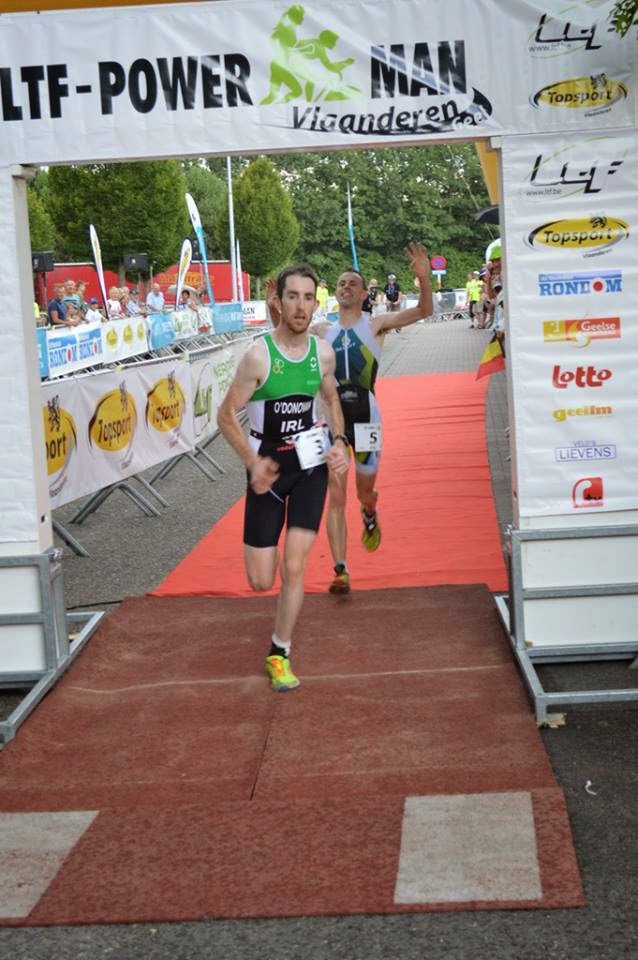 After the race it must have taken me 15 minutes just to get my breath back as I struggled to fight the cramps in my legs.


Literally one minute after I crossed the finish line, the heavens opened and the most torrential downpour of rain descended on us, reminding me that wherever I go I can’t escape the Irish weather.


Next up for me now is the 2014 Elite European Duathlon Championships in Austria in two weeks’ time.
Posted by Cathal O' Donovan at 10:39