This had been one of the key races that I had been targeting since the start of the year. The first step was of course to qualify, and then begin the process of training for it and to finally get out there in one piece. I’m talking about the bike J


I have been plagued with niggling injuries over the last few months meaning that it was very difficult to get decent blocks of training in. However, I prevailed and got stuck in with the job at hand.


My good friend Diarmaid Lane travelled out with me from Dublin Airport over to Austria. We flew into Vienna Airport with a very early flight Thursday morning. The small village of Opponitz where we were staying was a two and a half hour drive from the airport. The self-catering apartment looked out onto beautiful mountains and rolling hillsides.


Diarmaid volunteered to do all of the driving over the weekend which I gladly accepted. My first impression of Austria only increased in admiration the more I saw of it. Their roads are unbelievable. We didn’t see a single pothole anywhere and we were in extremely rural countryside. Their worst rural, country roads would outclass our best main roads. 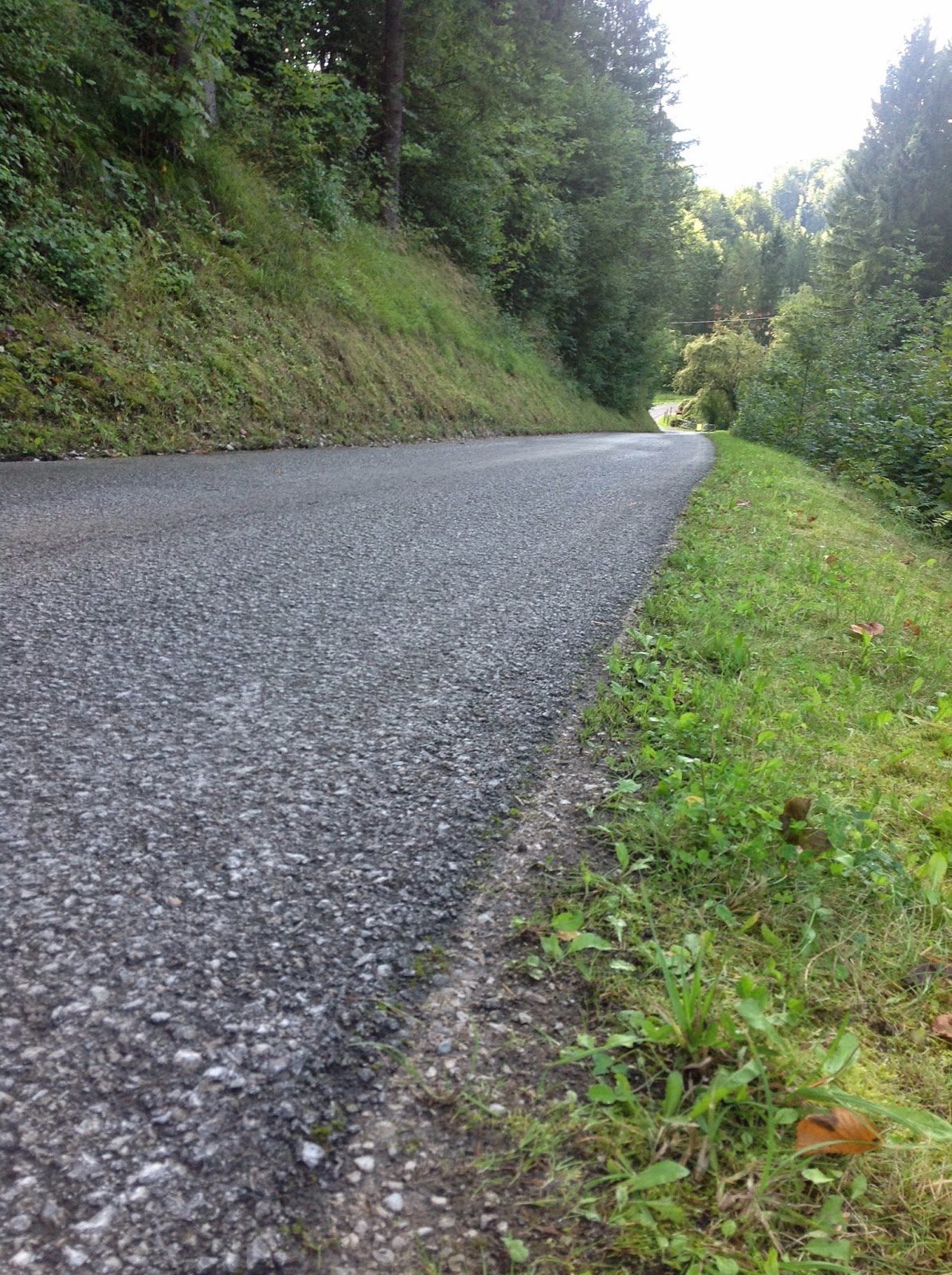 Another thing that I found out about Austria is that it is on average, around 500 metres above sea level which took a small bit of time to get used to as I was technically at altitude. At last, I can say I was training at altitude J


One of the funnier events that happened to me was when two Jehovah Witnesses called to the door of our apartment one day and handed me a flyer. Of course I didn’t speak any German and thought that they were salespeople selling mobile broadband as they kept pointing to the flyer and saying “website” and “Wi-Fi” so I politely took the flyer but only realised who they were afterwards, lol J. Talk about getting lost in translation!!


Over Friday and Saturday, I got an opportunity to run and bike the race course with the two other Irish athletes who were racing as well, Siobhan Horgan and Patrick Quinn. We all came to the same conclusion, the hills were serious!!


The race was starting in the town of Weyer with two laps of 5km going around Weyer which included a hill half way through that brought us to nearly to a walking run. The bike course was three laps of 14km with a serious hill, 3km long with an altitude of nearly 200 metres.


The final run of 5km ran in the opposite direction to the first run.


On Saturday as we walked around Weyer we were able to observe the athletes from other countries as they checked out the course. What a setup!! The British and French were totally kitted out with full official national gear from head to toe. We stood there with our mouths open in amazement as they moved around the course with their spare wheels, equipment etc. They had coaches, bike mechanics, sports masseurs and drivers. There were so many people wearing GBR that we were joking that they must have hired a jumbo jet J


The weather during the weekend was extremely changeable with thunder and lightning lighting up the place on Saturday night.


On Saturday evening we had to drive to the town of Grossaming for the Elite Athletes briefing.This was a fairly straight forward affair and we got to see some of the Junior athletes receiving their medals on the podium as that race was held in that town on Saturday evening.


The morning of the race was very wet with lots of rain but by three o’ clock, it was starting to brighten up.


This was the biggest race in terms of crowds and organisation that I have taken part in to date. On the way over in Weyer in the afternoon, I was unusually calm as I thought over in my head about my race plan. I just said to myself that there was nothing else I could so at this stage now so I might as well relax.


There were a lot of formalities that we had to go through before the race could even start.


First up was the registration where we received our timing chip, and got our race numbers marked onto our arms. They also took photos of our tri suits to make sure that they met the requirements, etc.


After that we racked our bikes and got our transition area sorted out. The transition rack was one single rack which meant that the bikes were quite tight together.


Around ten minutes before the start of the race parade, the sun came out with a serious ferocity.


The race parade involved us running down to the start line, from the top of the town behind a mascot waving the Irish tri colour and with the Irish national anthem playing out over the loudspeakers. What a feeling!! 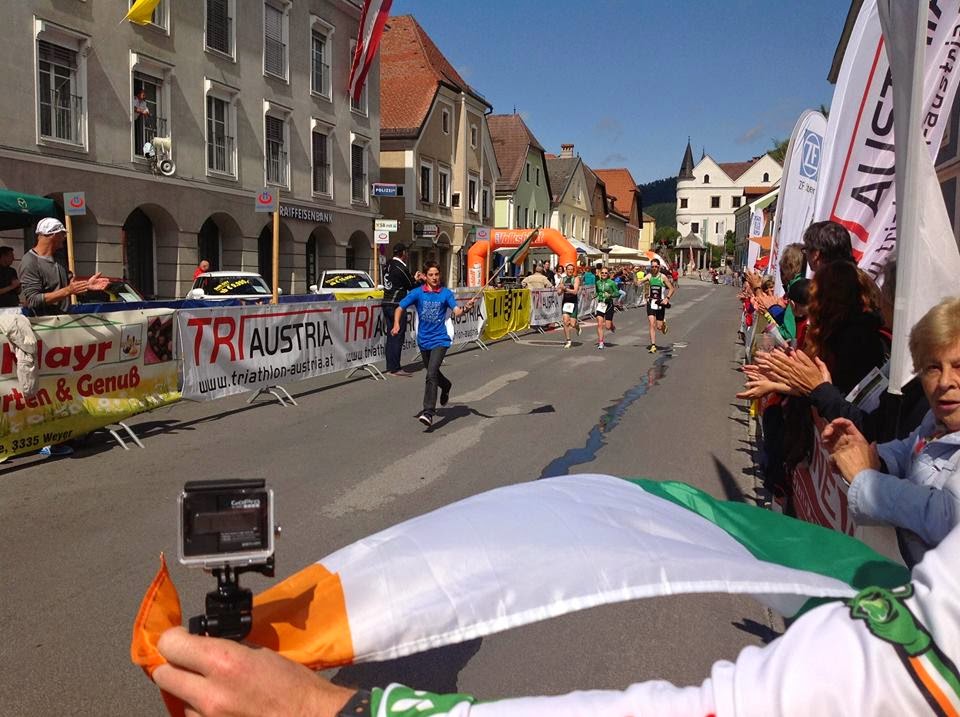 We were then called one by one up to the starting line and had to wait anxiously for the start.


I’ll never forget the noise. What a sound. The shouting and roaring of the crowds was actually slightly calming as I concentrated on straining to hear the starting signal.


As I looked up the road I could see Diarmaid off to the right hand barrier waving the Irish flag.


The Austrian national anthem began playing and the crowds starting clapping as the countdown began.


The race started and we tore off. I hadn’t intended to go out too hard but found myself at the head of the race. I led it out for just under one kilometre before the French started pulling me back. We went through the first mile in 4:52 minutes and the pace only increased from there. 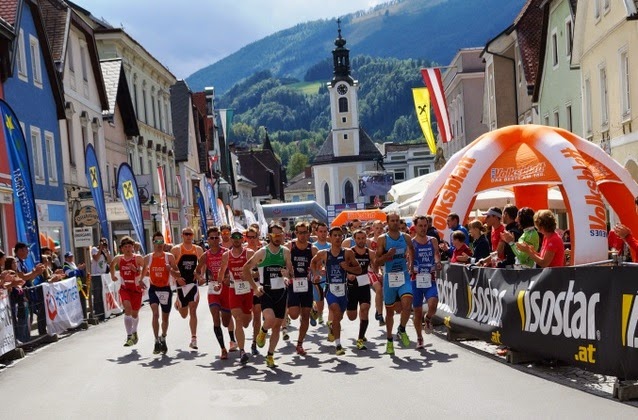 I came into transition 60 seconds down from the lead pack and in 5th position overall. I had hoped to be with the lead pack going onto the bike but the first run was blisteringly fast.


Diarmaid shouted the out to me as I got my bike in transition to let me know how much time I needed to make up. 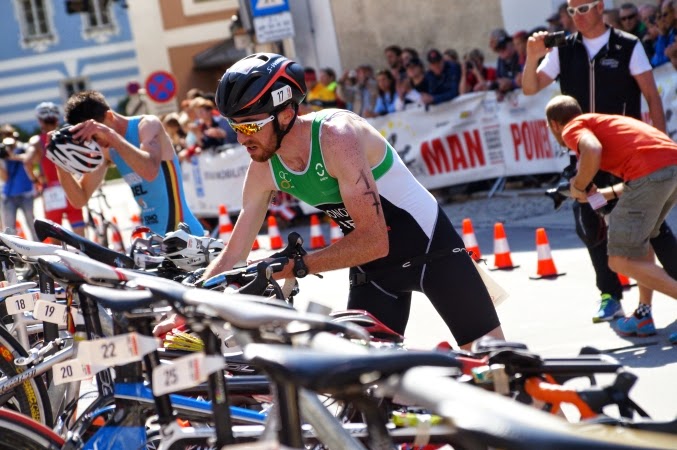 Straight behind me on the bike was a Belgian, a Spaniard and an Italian. I straight away started putting in a few attacks hoping to get away but the lads would just chase me down each time. However, they were not coming around to the front and seemed content to just sit on my wheel and let me do all the work.  We came within 20 seconds of the front pack at one stage but as I was doing all the work I had to pull up as I wanted to conserve energy for the remainder of the race.


Finally after a lap of 14km, the Belgian and myself broke away as we attacked the climb for the second time and dropped the other two.


Once we broke away, we worked very well by constantly rolling through and taking a turn at the front, hitting 70km per hour as we descended down from the climb.


The crowds at all of the junctions and corners that we went through were absolutely deafening with people shouting “Allez, allez, allez”, “Go, go, go” and shaking cow bells.


As I came into transition after the 42km cycle I was feeling fairly confident of out running the Belgian who was a few seconds behind me. 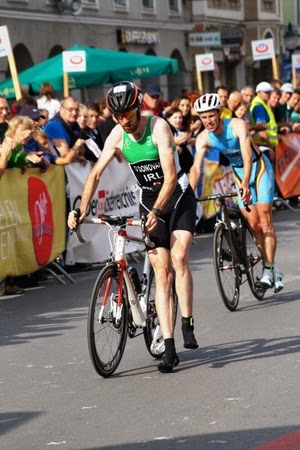 
At this stage now the Belgian was already running out of transition as I sprinted after him. Diarmaid shouted on encouragement to me as I passed him a few metres down the road.


I worked my way through the 5km and tried my best to get over to the Belgian but he slowly pulled away.


Finally, I came around a corner with around 300 metres to go and was handed a flower as I moved towards the finish line.


I could see Diarmaid at the barrier with the Irish tri colour ready so grabbed it from him as I moved towards the finish line.


Time seemed to slow down as I ran over the finish line and waved the Irish flag over my head. 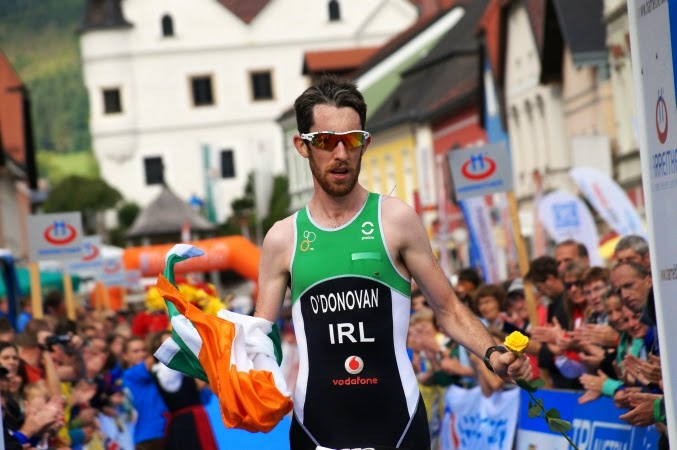 It was great to see my buddy Diarmaid at the finish area as he congratulated me. Diarmaid was a great comrade in the days surrounding the race and we had some laughs during the trip.


I know what I have to do now in order to podium at the Europeans and know that it will be possible if I can return next year. 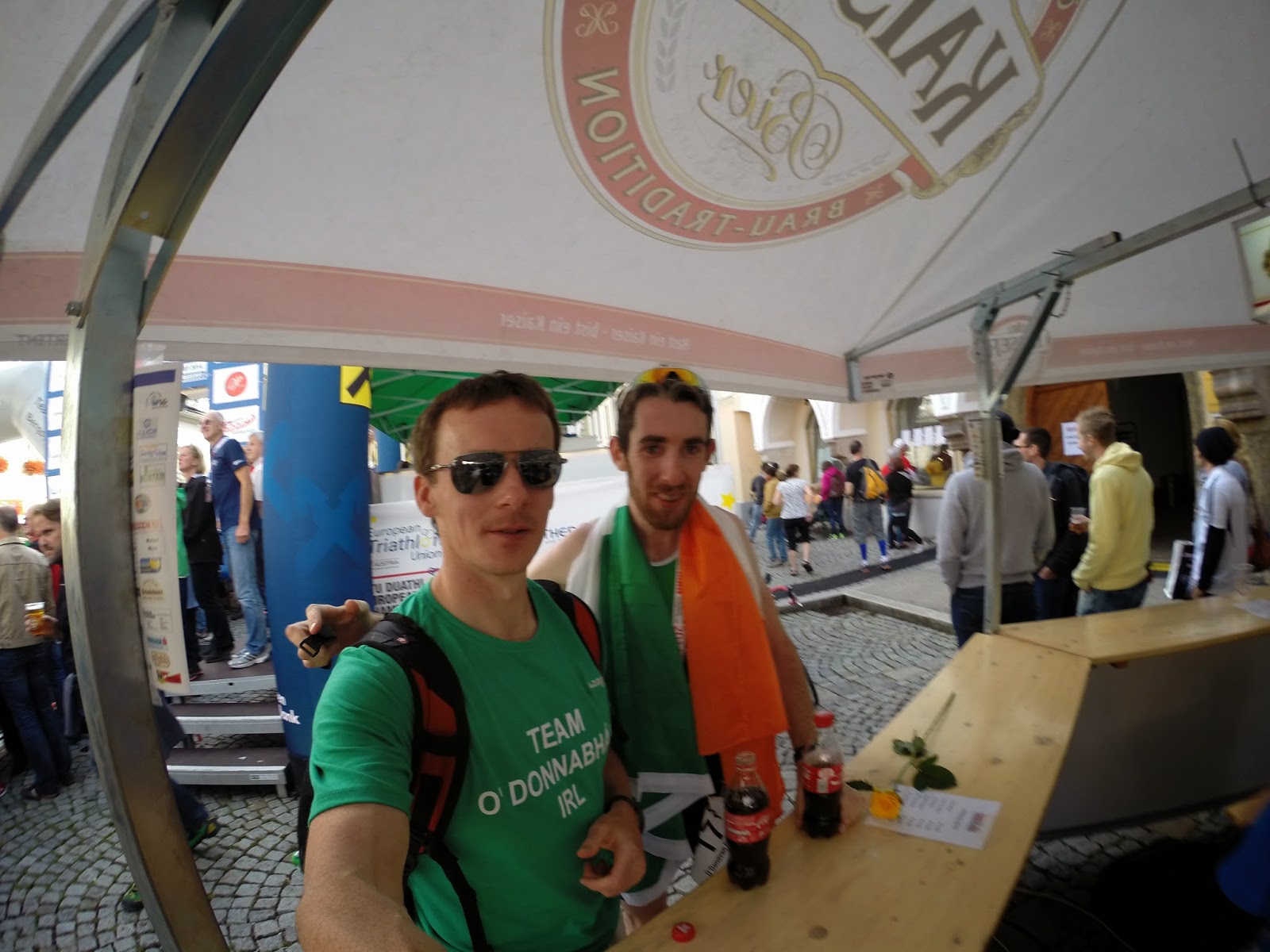